Overview Places to Go Things to Do

Benitses was a popular and lively resort during the 1980s that fell out of favour with visitors but has now become quite cosmopolitan due to its new marina where pristine yachts can moor alongside the boats of the local fishermen.  The main beach is in the southern part of the village and borders the main road on which accommodation, shops, restaurants and snack bars are plentiful. The sea is very clean as Benitses was one of the first communities in Greece to operate its own biological sewage plant.

Facing the marina is a tree shaded square and the pedestrianised road is busy with restaurants, coffee bars and shops.  Leading from this square and walking inland the Old Village is to be found, and behind the old stone fishermen’s cottages are the Ruins of the Roman Baths. They were part of an impressive Villa that was built when the Romans occupied Corfu and Benitses was a settlement.  There is much to see and they are in good condition.

The Shell Museum is the private collection of Napoleon Sagias, a diver who obtained his exhibits from expeditions in the Pacific and Indian Oceans.  The largest shell in the collection is the Tridacna Gigas, a clam shell from the largest bivalve, weighing 65kg and now an endangered species.  The rarest and most valuable shell is the Cypraea Fultoni that was purchased by Mr. Sagias in Mozambique from a fisherman who found it in the belly of a fish.  One of the most beautiful is the Haliotis Iris The name Haliotis is a Greek word that means sea ear, reflecting the ear-like shape of the abalone shell.  In 1998 the museum was honoured for its contribution to marine science by I R E D A, the Italian Institute of Marine Research.

Benitses is a relaxed resort that can offer more than a beach holiday. It has a good bus service to Corfu Town.  Car hire would be perfect for travellers wanting to explore further afield. 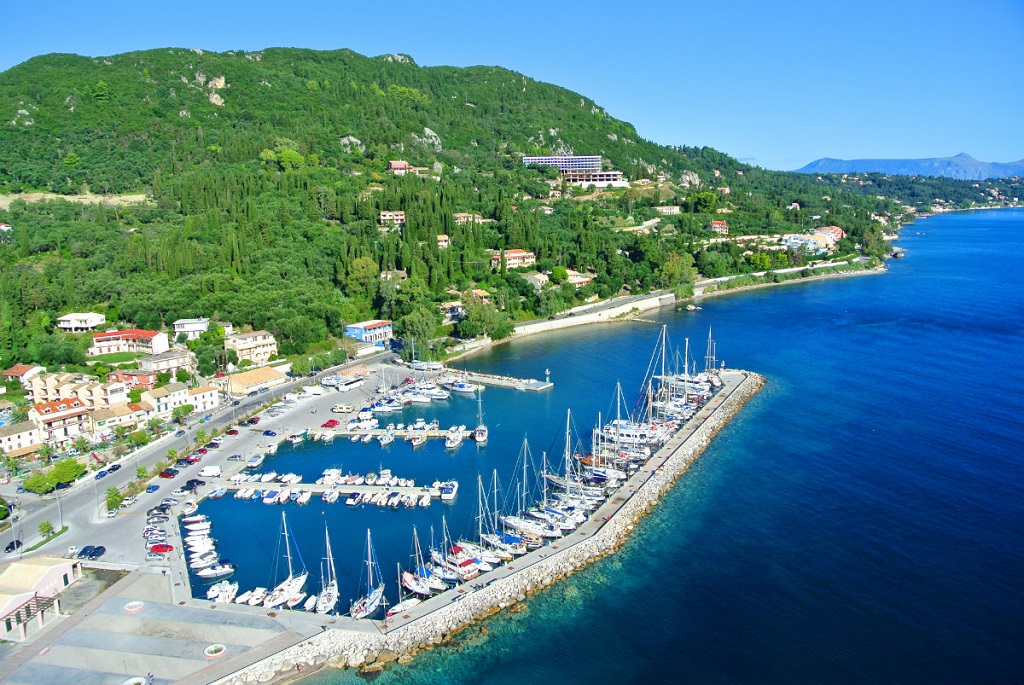 Located in the village of Gastouri, the route to the Achillion Palace takes you along coastal roads and through a landscape of orange, lemon and olive groves. Built in 1890 by the tragic Empress Elisabeth of Austria, the magnificent palace was designed with the mythical hero Achilles as its main theme.

Mouse Island or Pontikonissi, is a small, hilly and densely wooded island that legend says was formed when the ship that had taken Odysseus back to Ithaki returned to its home port. Poseidon, who was angry at being defied by the Phaeceans, turned the ship to stone. The 13th century Monastery of Pantokrator on Mouse Island, has a winding, white staircase that from a distance looks like a mouse’s tail.

Also in the Bay of Kanoni is Vlacherna Monastery. The Vlacherna Womens Monastery was founded many centuries ago on the little rocky tip of the Kanoni peninsula. The present chapel was built in 1685 and the oldest gravestone dates from 1785.

We use cookies to ensure that we give you the best experience on our website. If you continue to use this site we will assume that you are happy with it.I Agree